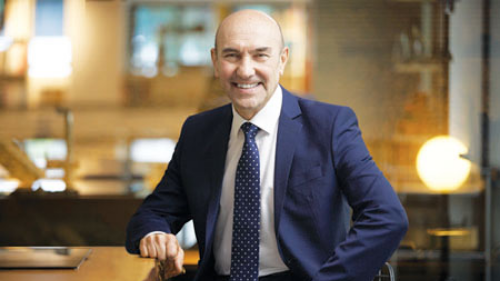 Born in Ankara in 1959, Tunç Soyer has lived in İzmir since his early childhood.

After graduating from Bornova Anatolian Highschool, he completed his university degree at Ankara University Faculty of Law. During this time, he worked as a correspondent in the Turkish News Agency and has translated a work on the tragedy of women in immigrant camps into Turkish.

Soyer has a master’s degree on “International Relations” from Webster College in Switzerland and on the “European Union” from Dokuz Eylül University. He founded a holiday village in Seferihisar in 1991 that is still in operation. Being a fluent English and French speaker, he was an active manager in the tourism sector for nine years.

In 2003, he became a consultant of the Mayor of İzmir Metropolitan Municipality Ahmet Piriştina on the obtainable financial resources of the European Union and strengthened his experiences on the economy and social life of İzmir within this period. From 2004 to 2006, he served as the Director of Foreign Relations of the İzmir Chamber of Commerce. In 2006, he was appointed as the General Secretary of EXPO İzmir.

In 2009 he was elected as the Mayor of Seferihisar and carried on this task for two terms. He has implemented the international local-scale development model Cittaslow (Slow City) first to Seferihisar and then introduced it to the seven geographical areas of Turkey and the Turkish Republic of Northern Cyprus.

He was elected as the Mayor of İzmir Metropolitan Municipality at the local elections held in March 2019.

He is married and has two daughters.

Mayor Soyer’s International Roles
• Member of Executive Bureau in the Congress of Local and Regional Authorities of the Council of Europe which represent 150.000 local authorities.
• Member of the ICLEI Global Executive Committee an organization with 1750 member cities across the world.
• President of the International Network of Cittaslow with 272 Cities members present in 30 Countries.
• Alternate member within The Euro-Mediterranean Regional and Local Assembly ARLEM, representing Medcities.
• Member of the UCLG Executive Bureau and World Council.
• Policy Councilor in UCLG Policy Council on Opportunities for All, Culture and City Diplomacy: Keys to Sustainable Development and Peace.
• President of the Association of Social Democratic Municipalities (SODEM) in Turkey with 141 member municipalities.
• President of the Social Democratic Public Employer Union (SODEMSEN) in Turkey with 189 Member Municipalities.
• President of the Union of Aegean Municipalities in Turkey.
İzmir on the International Platform
• Member of the Mediterranean Network of Cities (MedCities).
• İzmir will host the 2021 UCLG Culture Summit.
• Member of the UCLG’s Committee on Local Economic and Social Development.
• Recently became a U20 permanent Member City.
• Chaired the U20 Task Force on Inclusive Prosperous Communities