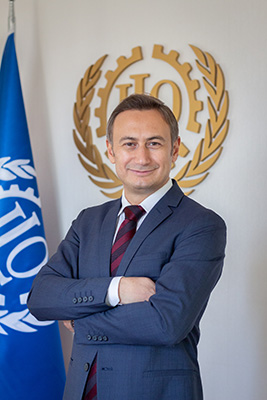 Director of the International Labour Organization (ILO) Office for Turkey

Özcan started his career in 1998 as an International Relations Specialist at Hak-İş Confederation.Later, in 2002, he established his own company in international risk consultancy.In 2004, he moved to the public sector, and he worked as the contract manager responsible for social projects supported by European Union (EU) funds in the Central Finance and Contracts Unit (CFCU) affiliated to the Undersecretariat of Treasury.

Özcan worked in the EU Delegation to Turkey as Social Policy and Employment Sector Manager between 2005-2015.Monitoring the reform process regarding the harmonization of Turkey with the EU in terms of legislation and practice in the field of social policy and employment, and political dialogue were among his main tasks, he also participated in the accession negotiations between the EU and Turkey on the Social Policy and Employment chapter.He also worked as the Coordinator of the "Human Resources Development" Team, which coordinates EU financial assistance in the fields of employment, education, health and social content.

Özcan has been serving as the Director of the ILO Turkey Office since 7 January 2015.

He is married and has two children.